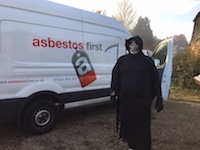 The lovely people at Asbestos First came today to make our beautiful barns safe for us to work on. As you can see, they definitely got into the spirit of things!
As well as asbestos removal, the newts have also all been captured and relocated to their new habitat, the engineer calculations were completed last week, and we’re starting to put in the driveway tomorrow. By the end of this month, we should have the driveway in, the new garage (with luxury bat loft!) erected, and be well on the way re-doing the roof and getting the structural work in place. It’s going to be a busy few months!

It’s been a lovely summer, and here at Raspberry Towers we’ve been taking some time off from site while we work on our next exciting project. Our two lovely barns are in an ecologically-sensitive site, and we’ve been working with local ecologist Guy Newman as well as Natural England to make sure we reduce our impact on the habitat as much as possible during the works – and that we leave it in a better state than we found it once completed. We’ve now got all the paperwork and licenses in place, and are carefully relocating the animals to a habitat we prepared earlier. Jo, our lovely engineer, is busy preparing the final calculations, and we should be starting work at the end of this month. Watch this space!

… nearly! Our beautiful cottage in Collier St is finally finished. The cleaners have been, the garden is looking amazing, and as soon as I can get the skip collected from the driveway we’ll take some photos and put it on the market! Have a fantastic Bank Holiday weekend, everyone!

The Collier St project is on the home run now. The decorator’s made a start, the bathrooms are starting to go in, the tiler’s done some tiling. I like this part of the project – the decisions have all been made, and you start to find out whether it all looks as you imagined it, all those months ago! We should be dropping the scaffold next week, and will really be able to make a start on the new cottage garden, which will be the finishing touch this project needs.

January can be a bit of a let-down after the Christmas festivities, but we’ve had plenty of things to keep us busy. The weather’s helped keep us happy as well: the clear, frosty mornings in the middle of the month have really showed off what a fabulous location the new Collier Street project has, right on the edge of the village with views over the fields for miles. A fabulous pink sunrise over the misty fields and ice-sparkled hedgerows really gets the working day off to a good start. We were even treated to a rare (for Kent) starling murmuration, with tens of thousands of them swirling and coalescing over the fields just before sunset. We have managed to get some work done also, in between admiring the views, and are just starting plastering as I write. Watch this space – it will be on the market soon!

I’m writing this on New Year’s Day, 2016. I’ve been finishing off a bathroom, ready for our newest tenant to arrive in a few days time, and conducting a viewing on one of our other properties – not a traditional New Year’s Day, but I’m happy with it. The construction industry pretty much closes down between Christmas and New Year (although we’ve had a few people in finishing up – thanks guys) and it’s a good time to take stock, to look back on where we’ve been and to gaze forward to where we’re going. On the whole, we had a lot of fun in 2015! We’ve built some new houses, renovated a few properties, said goodbye to some old faces and worked with some new ones. We’ve got a few things on the go to start 2016, and are looking around for the next project – a positive start so far! From all of us here at Raspberry Homes, we wish you all a very happy New Year.

November 2015: Race against the weather!

Richard & Lewis, our always-reliable carpentry team, have been working hard this week to get the extension underway at our soon-to-be-beautiful cottage in Collier St. If the weather continues to hold, they’ll pitch the roof next week ready for tiling the week after. Once the roof’s on, the British weather can rain all it likes – we’ll be working in the warm and dry! Fingers crossed …

The Staplehurst stables have really taken shape this month. The plaster is on the walls, doors & windows are starting to arrive, and we’ve ordered the custom-made balcony glass and staircase. It’s a small site, so we can’t have too many people working at once, so progress has been steady rather than swift! But it’s a lovely building and great to have returned it to use.
The main focus this month is going to be the groundworks at our new project near Marden; once we’ve got the messy stuff out the way we can get a scaffold up and really make some progress. Watch this space!

Even though the sun has returned, there’s a definite chill in the air which says that winter is on it’s way. We’ve been moving steadily forwards on the Staplehurst build, and have been awaiting planning permission for our extension in Collier Street. In the meantime, we’ve begun stripping out, and started some preparatory works for it. We’re also looking for a home for several hundred metres of seasoned lime and sycamore wood, which is all sawn into 2” planks and waiting for someone to turn it into something beautiful. Any takers?

We’ve just taken ownership of a somewhat-unloved cottage in a rural village in Kent. Nestling in a cornfield, this was originally part of a large farm complex – the farmhouse and barn are now stunning dwellings, and the large double oast is currently being converted. We’ve got the building that used to be the labourer’s cottage. Currently mostly obscured by a concrete barn, this 18th-century cottage is going to be a stunning 4-bed home when we’re finished, comfortably set in a beautiful cottage garden and with the fields stretching to the horizon. Keep checking back to see how it progresses!